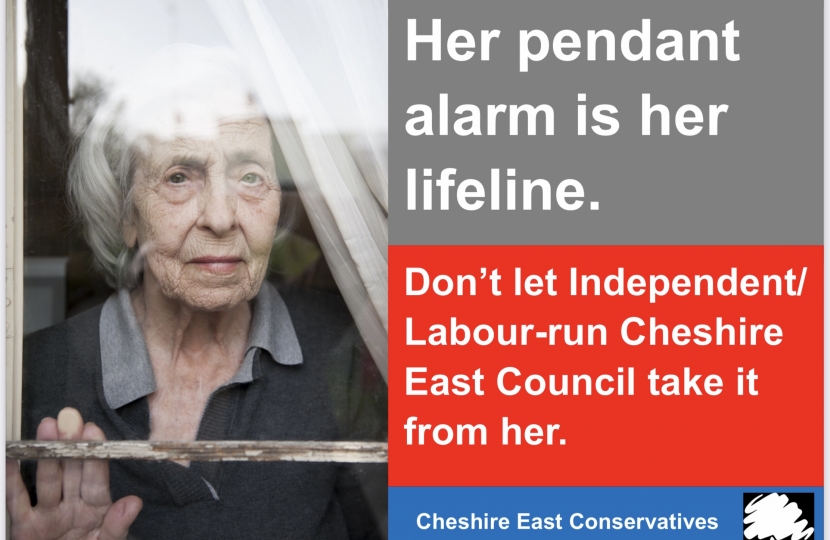 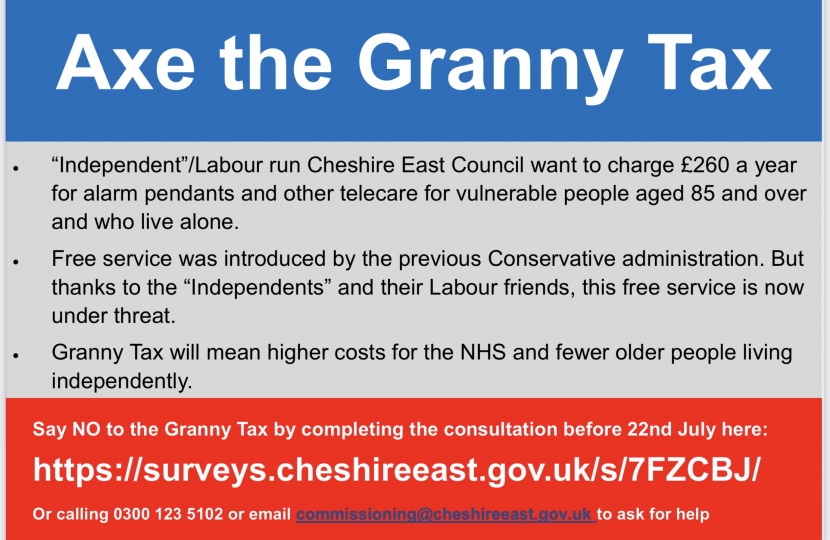 The Cheshire East Labour/Independent Administration is seeking to axe the free basic telecare package for all over 85’s LIVING ALONE, which was introduced by the previous Conservative administration in 2015.

Within the NHS Hospital Annual Reports to Scrutiny, it was acknowledged that Cheshire East had an aging demographic with a far higher over 85’s population cohort than many other local authorities.

At this time, Cheshire East was a national outlier for hospital discharges straight to care homes as following a fall at this age, many are unable to live independently at home. This too had a significant impact on adding to the Council’s Social Care budget.

To offer this small cohort a relatively inexpensive telecare package (alert pendant or alert bracelet) free of charge, was considered a sensible investment in terms of monies saved (ie: the cost of hospital care, care packages and/or care home fees are considerable for every individual.)

Importantly this service was to be paid not from CEC Council Tax but from the Better Care Fund, the fund provided by the NHS, held by the local Authority and where both NHS and Care partners negotiate its allocation.

My understanding is that this situation has not materially changed (other than possible temporary reductions in admissions to care homes during the Covid-19 pandemic).

Of course the difficulty with proactive initiatives that seek to ‘stop something bad happening’, is that you don’t really know if it works or not – until you stop it and the trips and falls rates start to rise again and the health outcomes for the over 85’s start to deteriorate. (That’s a very hard way to learn the true efficacy of the initiative!)

The rather ‘off the wall’ proposition that this initiative is inequitable and unfair because people who die younger are denied access to a free service, or that many over 85’s don’t need it needs to be considered from a statistical population health perspective NOT from an individual case study perspective.

The decision was made on evidenced data from the NHS that identified higher risk, poor outcomes and significantly higher costs were exponentially higher with age and in particular, the over 85’s – particularly those who lived alone and so were less likely to be able to be able to return to independent living at home (and more likely to need to go into care).

Inevitably some younger people are frail and will benefit from telecare BUT as with all care services, if they cannot afford to pay for such services, they will get them free anyway through the Adult Social Care Budget. In addition younger individuals are less likely to live alone”

“My concern is that the Council’s Budget (MTFS) has already identified savings in this area BEFORE the Consultation had been commissioned and implemented. That is why as many residents as possible should respond to the Consultation before it closes on July 22nd.”

The Report and the Council’s recommendations are scheduled to come to the Adults and Health Committee on 27th September.

GIVE YOUR FEEDBACK ON THIS TELECARE CHARGING PROPOSAL: https://surveys.cheshireeast.gov.uk/s/7FZCBJ/