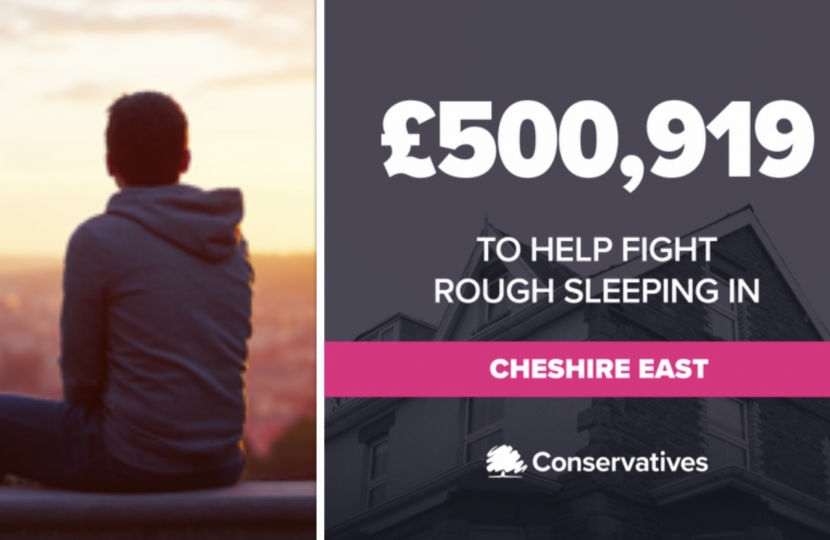 Councils have been given a further £200 million in the next stage of the Government’s successful rough sleeping programme Of this, Cheshire East Council has been allocated £500,919 to further the work they have already commenced, funded by earlier grant funding of over £1,000,000 provided by this Conservative Goverment, to end rough sleeping by the end of this parliament.

More rough sleepers are set to be helped off the streets and into safe accommodation thanks to a further £203 million funding. The funding will be allocated to councils across England and will support vital projects such as shelters, specialist mental health or addiction services, and targeted support to help rough sleepers off the streets for good. It will be used by councils, charities and other local groups to fund up to 14,500 bed spaces and 2,700 support staff across England.

This funding is one part of an unprecedented £750 million investment this year to tackle homelessness and rough sleeping – part of the government’s drive to end rough sleeping by the end of this Parliament.

Analysis of the Rough Sleeping Initiative – now in its fourth year – shows that the programme has reduced rough sleeping by almost a third compared to areas which have not taken part in the programme.

Building on the past success of the programme, funding has almost doubled this year and will provide additional support to help those affected by the COVID-19 pandemic.

The number of people sleeping rough across England has fallen for the third year in a row, and by 37% in the last year alone.

Funding from previous years of the programme is already having a transformational effect at a local level with local authorities reporting significant falls in the number of rough sleepers.

Today’s announcement comes after the government made an additional £212 million investment in new, secure, long-term accommodation for rough sleepers earlier this year, with 6,000 homes pledged by the end of this Parliament.

This is alongside the government’s unprecedented Everyone In initiative, launched by the Housing Secretary at the start of the pandemic to protect rough sleepers, which has so far supported 37,000 people, with more than 26,000 already moved on to longer-term accommodation.

Since September 2018  Cheshire East Council has received over £1,500,000 from this Conservative Government to tackle Homelessness and Rough Sleeping - in addition to monies received during the Covid Crisis since March 2020

January 2020: Cheshire East Council secured a cash boost of more than £400,000 for its strategy to help the borough’s rough sleepers. The council received £438,329.30 from a £112m funding pot as part of the government’s rough sleeping programme.

March 2019: A further £388,303 was made available to the council through the government’s rough sleeping initiative, to enable Cheshire East’s housing team to continue its work with rough sleepers and offer short-term sheltered accommodation, avoiding the need to sleep in doorways and parks.

September 2018: Cheshire East was one of 83 councils who will share in a £30m pot of government cash to help boost the support offered to people sleeping rough or who are at risk of becoming homeless. The council received more than £250,000 as its share of the fund.