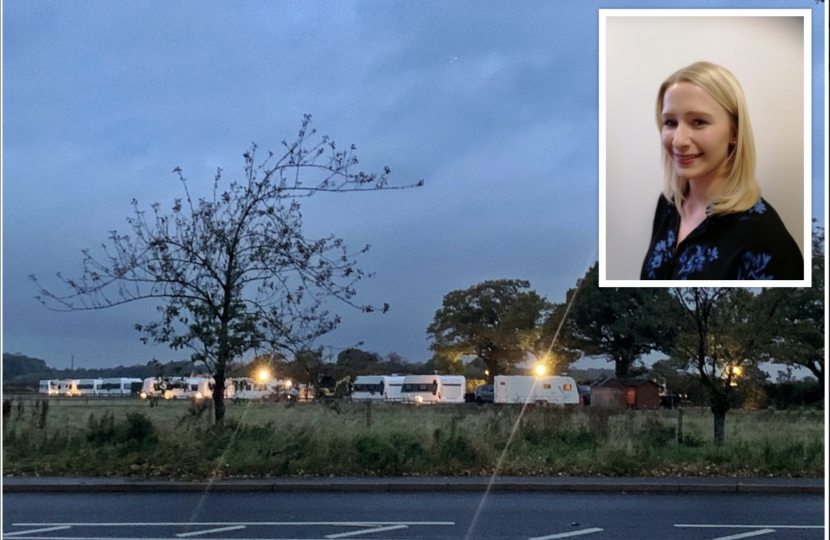 Mobberley’s Local Ward Councillor Charlotte Leach, together with local residents and support from MP Esther McVey, have worked tirelessly with Cheshire East Council over the past year following a significant traveller incursion at Mobberley onto agricultural land in contravention of planning policy and appropriate planning permissions. After a three-day trial, Cheshire East Council has secured a High Court order forcing several families to remove their caravans from a green belt site in the borough.

The judgement follows an interim injunction, obtained last August, preventing the siting of further caravans on a privately-owned field off Broadoak Lane, in Mobberley.

The interim injunction also prevented the construction of a hardstanding, the importing of materials and erection of buildings and other structures without planning permission.But despite the court order, additional caravans were brought on to the site and additional works continued in breach of the injunction.

The council therefore commenced proceedings for contempt of court against several defendants who had been involved in the breaches.

The High Court in Manchester has now granted in principle a final injunction restraining further development on site and limiting the number of caravans to eight, pending the outcome of a planning appeal.

Ten allegations of contempt of court, made against the defendant, Mr Michael Maloney, were proven, following his breaches of interim injunctions.

Admissions of contempt were made along with apologies to the court by contractors W Doherty and Sons, Total Plant Hire, Paul Rennie and Adrian Draper. All agreed to contribute towards council costs.

In passing judgement, The Honourable Mr Justice Turner QC, said there was a strong public interest in ensuring orders of the court are obeyed. He also found Mr Maloney’s evidence in defence of the allegations of contempt “unsatisfactory in several respects."

I want to thank every resident who took the time to send me evidence of the breaches of the High Court Order as this gave us a watertight case. I would also like to thank Cheshire East Council’s legal and planning enforcement teams who have worked hard on this case.”

“We still have a long road ahead of us but today is positive progress and as you know, I will do everything in my power to work towards the land being restored to its rightful condition. Over the coming days I will provide a further update on what happens next in respect of the Enforcement Notice, planning appeal and second planning application”.

The Broadoak Lane site remains subject to separate planning enforcement action, with an appeal hearing to be set by the Planning Inspectorate.

Meet 3 of our great Police and Crime Commissioner candidates