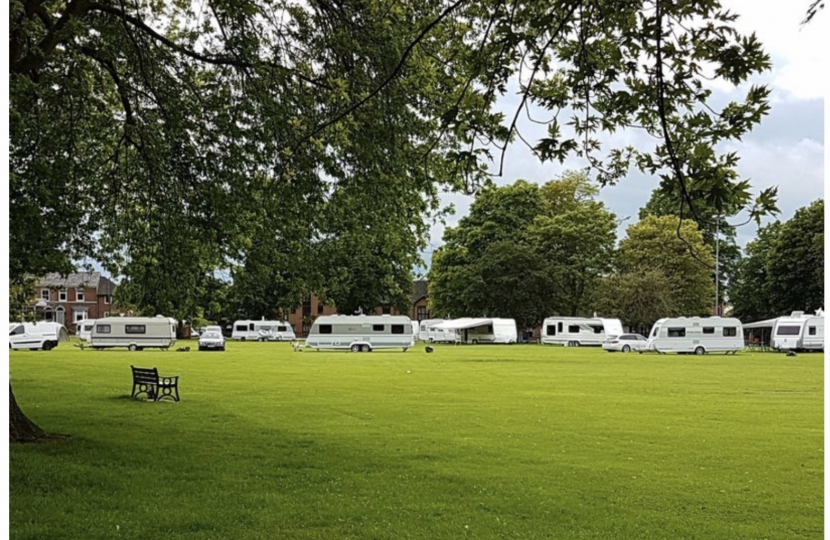 Cheshire East Council has secured a two-year Injunction Order to prevent any future unauthorised encampments on the Barony Park in Nantwich.

The Judge, H.H.J. Davies granted the Injunction, which bans the siting of a caravan or a mobile home for a period longer than four hours without permission.

This follows regular seasonal incursions by large numbers of caravans and vehicles onto this important area of public open space. If the owner is ordered to remove the caravan or mobile home, they have four hours in which to comply with the request or be in Contempt of Court, which could lead to their arrest.

In the council’s application, the court was told about the general nuisance, anti-social behaviour and damage caused to the Barony Park amenity, the cost of clean-up and the cost of having to close sports and leisure facilities by Everybody Sport and Leisure.

Crewe and Nantwich MP Kieran Mullan was pleased that the Injunction, combined with the newly installed perimeter fencing, meant that progress had been made and paid tribute to local residents and The Friends of Barony, specifically, Rachel Wright for the hard work, dedication and perseverance it has taken to reach this stage.

Nantwich Councillor’s Peter Groves and Andrew Martin, said that whilst they were pleased that an Injunction had been granted, they hoped the Council would now press ahead with plans for a transit site in Middlewich, in order to further strengthen the Council’s position.

Cheshire East Council is required to provide a suitable Transit Site for the travelling community within its boundaries as part of its Local Plan. The progression of the Cledford project, subject to planning permissions, has finally been put on the Forward Plan to be considered by Cabinet in November 2020.

Chancellor of the Exchequer, Rishi Sunak on the Winter Economy Plan